Omniscient Narrators of the News: Google Plus Hangouts On Air as a Newscast Coffee Shop 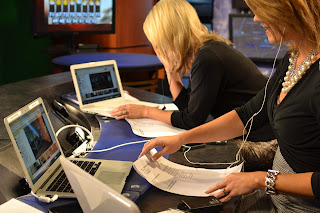 It's an odd feeling to be in a TV studio reading the news in Columbia, MO and hear a rooster crow in Trinidad or glance at your laptop during a soundbite and see a man cooking tacos in his kitchen in Jefferson City.

You're reading a story about the passing of Andy Griffith. "Whatever happened to Mayberry?" I hear the Hangout guests say. A soldier died in Afghanistan tonight......."God bless his family," they remark in my ear.


It's the conversation that's happened all over the world for decades during TV newscasts but not until recently have broadcasters had the ability to see, hear and talk to their viewers face to face in real time during a newscast. Text based chat during a newscast is nothing new but this is a group human interaction.  KOMU-TV's news Hangouts are a group news conversation much like a coffee shop.  Guests come and go as they please.  But instead of reading the newspaper, they watch the news or chat about what they think is news.


It's this kind of real time feedback that this broadcaster finds fascinating for journalism and for business. Google Plus Hangouts On Air have created a face to face, group back channel for people to interact with their audience in real time.  It's as if the viewer has left the living room and taken up residence in your brain.  Hangout guests comment during a news story and then the broadcaster has the ability to share the Hangout's comments moments later.


While I wear two earpieces during a newscast, one for the producer and one for the Hangout guests, each ear piece has a volume control.  An anchor is already trained to be able to read and listen to producer commands at the same time.  It took me a couple weeks to get the hang of listening to the Hangout during a newscast.  My hangout has also trained itself to comment in short phrases that I can easily process and work into a newscast just as producers are trained to talk to their anchors in short phrases.  It's like having 9 other omniscient narrators of the news.

To watch a past Hangout, visit www.youtube.com/komusarah
My G+ Profile www.plusya.com/Sarah