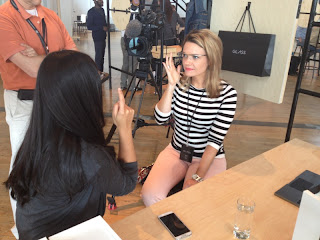 As I walked up the stairs to pickup my Glass at Chelsea Market in New York, I kept looking at my mobile phone like a girlfriend looks at her boyfriend right before she breaks up with him.  Would Glass mean the beginning of the end for my handheld device? I was about to test drive the Model T of wearable computers and couldn't help but wonder what would happen to my horse.

A receptionist showed me to my seat in a loft that looked like a swanky LensCrafters and asked me to choose the color of my device.  I chose "Shale" (Gray) as I wanted it to be more neutral on my face so it wouldn't be too much of a distraction during our broadcasts on the Veterans United Network.

I opened a Hangout on my laptop so others could view the Glass fitting.  You're allowed to bring one person but Google didn't say anything about inviting virtual friends. My "Glass Guide" handed me a sturdy box filled with the Glass itself and accessories that came with the $1500 (plus tax) price tag.  Accessories included sun shades, clear shades, a cloth carrying case and a USB charger.  At the loft, there is giant row of windows. After my hour long fitting ended, I opened up my first Hangout using Glass.  As I climbed the loft steps to the skyline, I felt liberated being in a mobile Hangout without having to hold any device!  I showed people in the Hangout from Austria to Australia a view of the New York skyline directly from my point of view. Glass, you had me at hello.

I've been a "Glass Explorer" for 5 days.  What follows are my experiences with having the internet in my eyeballs. 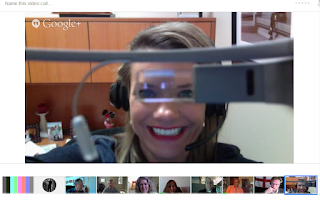 My mind is spinning with how journalists could use this hands free device to capture events live via Hangout. Glass is not currently compatible with Hangouts On Air that stream live on YouTube but a station's control room could easily route a Glass Hangout on TV with a scan converter. And to think +Jean Francois Desmarais lugged around a laptop with a mobile wifi to try to capture the riots in Canada via Hangout.  Can you imagine what he could have done hands free with Glass?


On the way home en route to the airport (I flew up and back the same day.), I opened another Glass Hangout in a moving New York City cab.  To my surprise, Glass didn't lose the connection.  As I got ready exit the cab, I was going to stop the video call as instinctively I've always needed an extra hand to grab bags and exit the vehicle.  But since this Hangout was hands free via Glass, I realized I could continue communicating.  As I was walking through the airport with the Hangout still running, I got my first... "Is that Google Glass?"  Carrying on a conversation with people from around the world via a Glass Hangout and a curious traveler at the same time, all while walking through a busy airport, I realized this device will make video calls more interactive and mobile. Two additional power surges into the Human Media Movement.

Glass Comes Home
I asked my teenagers who are impressed by little in the world what they thought of my new device.  "You look like a dork," said my son.  "But can I try it?" I put the Glass on his face and he was hooked.  He's 18 and it was like you handed a 2 year old his first tinker toy. This is the boxing video he made with Glass. It's like people are seeing their own hands for the first time.

Glass Backwards
My 15 year old daughter and I put together this Glass video.  She's a dancer and wanted to demonstrate what it feels like to do a back bend.

Oops I Did It Again 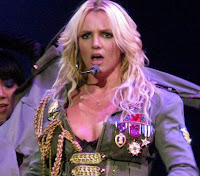 Be careful of how you set up your "sharing contacts" on Glass. For some reason, Britney Spears was the first one of my "sharing contacts". (Don't ask me why.)  The share button and the delete button toggle are closely tied with similar Glass gestures.  It's the difference between a temple click and a swipe.  If Glass thinks you're clicking instead of swiping, you've just unintentionally shared a photo with the first person in your sharing contacts.  I'd like to apologize to Ms. Spears and to the Dalia Lama who both got random Glass photos of my hands!

My office mates at Veterans United enjoyed trying on the device, taking pictures, sharing with Britney and by far their favorite feature was the Glass navigation system.  "Whoa," you could hear them say as they realized when they turned, so too did the map before their eyes.

Glass Support:  Why Can't I Add a Wifi Network?
The next day, I had trouble figuring out how to add a wifi network from Glass.  So I called the phone number on the box. Keep your unique Glass ID that's at the bottom of your appointment letter as you'll need that number for customer support. I dusted off my neglected handheld device and dialed the digits. Bart, a very patient and helpful Glass support technician, spent the next 20 minutes answering my questions and walking me through how to add a wifi network.  Hint: You can't add a wifi network on Glass while tethered to blue tooth.

My next Hangout on Glass was with a group of Blind veterans.  The group is learning how to make relay calls for deaf and hard of hearing individuals using Hangouts.  I hopped into their training session to say hello.  The former radio operators who are World War II veterans were fascinated with Glass and the ability to control a computer with your voice. Because of its voice integration, I could see Glass being helpful for individuals with sight impairments like these veterans as it would allow them to control a computer hands free with their voices. No, they wouldn't be able to see the display but with a further refined audio integration, who knows how Glass could enhance their lives. 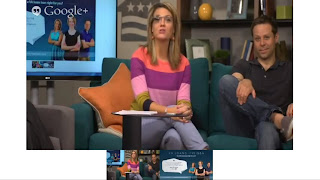 Next it was time to test drive Glass during a live broadcast.  I always use a laptop on-air so I can monitor what we call the social "back channel".  People comment via Google+, Facebook and Twitter and then I read some of those comments live on the air.  On this day in an informal Q and A session about VA Loans, I introduced our viewers to the device on my face and introduced the concept of curating their comments via Glass.  I didn't have to bury my face in a laptop to read those comments.  I just swiped my temple.  Developers:  Please invent a tiny remote control or some other device that allows you to scroll through social media notifications without having to swipe your forehead. Yes, it kind of defeats the purpose of a hands-free device but for a broadcaster, it buys us time until swiping your forehead is as commonplace as looking down at your smart phone.

Next, I took Glass to "Art in the Park" in Columbia, MO, a display of artists, gardeners and musicians.  I got many stares. "Is that Google Glass?" I met up with fellow Glass Explorer +Aaron Fuhrman and let him try on my Glass.  This was his reaction.

June 13th Glass at the World War II Memorial
Our next formal outing with Glass, is a virtual tour for terminally ill or aging veterans.  These men and women, most served during World War II, are too frail to physically travel to see their memorials so for the last 6 months, Veterans United & Community members have set up digital displays for these heroes to experience their memorials via +Google+  Hangouts.  Virtual Photo Walks videographers have shown these veterans not just Washington, DC, but Pearl Harbor in Hawaii, the USS Alabama and even the Beaches of Normandy, France, the site of the D- Day invasion.  There, a D-Day veteran got to see and hear the sound of the waves on Omaha Beach.  For our next tour, I'll be at the World War II memorial testing Glass to give veterans a unique, hands-free point of view. Wish us luck!  And if you know a veteran who is unable to travel to see their memorial, please contact me overthehillanchor@gmail.com.

I've had Glass for a total of 5 days and while I am spending a lot less time hanging out with my phone, it is still in the picture.  No big breakup planned but I'm really starting to like this guy. 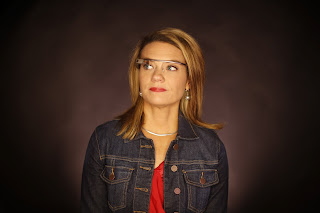