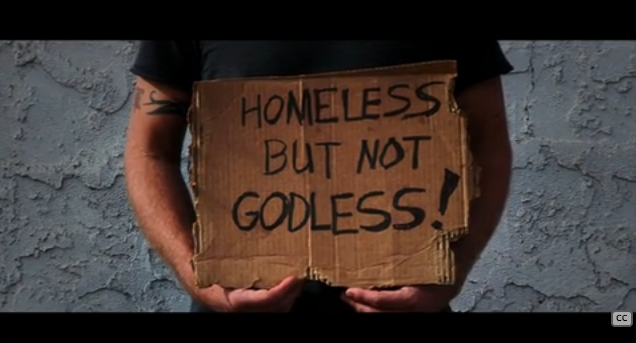 In the last 24 hours, 22 veterans took their own lives. Justin Coil could have been one of them. How many times have you passed a seemingly homeless person with a cardboard sign and not stopped to help? I do that more often than I should. Perhaps, we're in a hurry. Perhaps, we swerved into the other lane at the intersection because we didn't want to make eye contact with the person on the side of the road. "He's just going to take the money you give him and buy beer," we irrationally reason. Sadly, that's some of our self-talk as our vehicles - that probably have enough spare change in the consoles to feed an entire family - inch closer to the words written in black Sharpie. "Homeless: Need Help." But what if that person honestly needed help and our stereotype of them meant their family would go hungry? What transpired last year in a minivan at a Columbia, MO intersection makes me think twice about passing by the people holding cardboard signs. In fact, there's a new way we can attempt to help all of them with something far more valuable than just our pocket change.


Shelly Silvey is the Director of Creative Services at KOMU-TV. She's a 43-year-old-breast cancer survivor, a mom, and last year her decision to turn her minivan around changed one mid-Missouri veteran's life.
Justin Coil served in Iraq and saw his share of trauma. During his transition home from the military, this 37-year-old former soldier began to suffer from the effects of PTSD. A native of Harrisburg, Justin struggled with employment and relationships. He traveled from Columbia to Phoenix to California and back, living in the woods and on the streets, that is until one day he decided to make a sign to get money for food.

Shelly was coming home from work when she saw Justin on the side of the road. "He looked healthy and strong and I wondered why would this man be asking for help as he looked like he could work?" She rolled down her window and started asking Justin questions about how he came to be holding a cardboard sign on the side of the road. She learned he was a veteran. Her conversation ended with "I can't give you money, but I will give you a job."

Shelly not only hired Justin to work at KOMU, but he got the chance to learn about video production. When the #No1LeftBehind campaign approached KOMU to do a documentary about veterans homelessness, Shelly had the perfect crew (two veterans) to make it happen. Justin had stayed in the Welcome Home shelter. Currently, there are only 9 beds. Shelly says he would routinely give up his bed so older veterans would have a place to stay. Although homeless himself, Justin refused to leave his fellow veterans behind.

#No1LeftBehind is a joint effort between Welcome Home, the Columbia Housing Authority and the Truman Memorial VA Hospital to give a hand up to people like Justin by refurbishing the site of the Deluxe Inn on Business Loop 70 to create a Veterans campus that includes a new Welcome Home Shelter and 29 Patriot Place apartments. Veterans not only get a roof over their heads but access to VA services that can help them with their physical and mental health. The goal is to end veteran homelessness in mid-Missouri. Currently, there is no emergency shelter for female Veterans. Watch the video to the right to see how homelessness has affected veteran Davina Eubanks of Columbia.

Justin served on the video crew for Director Brad Pulliam, another Columbia, MO veteran, to create the "No 1 Left Behind" documentary on the very issue that had dogged Justin since his return from the service: PTSD and homelessness. As you watch the KOMU program, keep in mind this very important back story. It's a lesson to me on how to behave when I encounter people asking for help. Don't change lanes. Don't look away. Turn around your minivan. Leave no one behind.

While the documentary is completed, Justin is still writing the ending of his real-life story. This year, he started his first semester at Mizzou and is interested in a career in video production. He is in the process of reuniting with his family and is now getting the proper medical care to allow him to work, all because one woman refused to leave a veteran behind. Most veterans who need help aren't standing on the side of the road holding signs. They're suffering in silence and waiting for someone like you to help them. This isn't a problem just for the veterans or military communities to solve. Homelessness and Veteran suicide affects everyone.

Civilians especially need to embrace this proposed solution. We civilians need to do our part to help these men and women who offered to pay the ultimate price for our freedom. They fought for our homes. Now, it's our turn to fight for theirs. We can't all do what Shelly did.
We can't stop for them all, but supporting this campaign might be the equivalent of rolling down your window and offering a veteran a house, a warm meal and a better chance at life. Those things are far more valuable than our pocket change.